To protect community cats, yourself, and the community you serve, you need to know the facts.

Facts: Elimination of a particular population of cats can be quite difficult, as even the most intensive eradication programs have demonstrated. Complete elimination can also backfire when, for example, the population of an island’s rodents skyrockets — threatening the very wildlife whose protection prompted the eradication campaign.4,5 Nevertheless, a number of TNR programs have demonstrated dramatic population reductions and, in some cases, have completely eliminated colonies of free-roaming cats. Among the most well-documented examples:

Facts: Best Friends operates more large-scale TNR programs than any other organization in the country; as such, we are in a unique position to comment on the positive impact of these programs. Our firsthand experience, and evidence from a number of studies, shows that the vast majority of unowned, free-roaming cats are healthy — even thriving. During an 11-year observation period, more than half of the 23 cats living continuously on the University of Central Florida campus were estimated to be 6.8 years old or older, for example.6 A 2012 nationwide survey conducted by Alley Cat Rescue revealed similar longevity: One quarter of TNR organizations responding to the survey had colony cats in the 6–8 year range and 35 percent had cats in the 9–12 year range, while 14 percent reported caring for cats 13 years of age or older.11 And a number of studies have found that cats involved with TNR programs are “surprisingly healthy and have good body weight.”12–14

The research shows that well-managed TNR colony cats are, generally speaking, just as healthy as indoor-outdoor pet cats,15 with rates of feline leukemia virus (FeLV) and feline immunodeficiency virus (FIV) infection “similar to infection rates reported for owned cats.”16 Comparable findings have been reported in Ottawa, Ontario.17 By contrast, significantly higher rates of both FeLV and FIV have been observed where no active TNR program had been implemented.13

Fiction: TNR encourages the abandonment of cats and kittens, and might actually be considered abandonment.

Facts: TNR is not abandonment; healthy cats are merely being returned to their neighborhoods. Existing anti-cruelty statutes that address the act of abandonment are contingent upon the critical elements of intent and the foreseeable harm that may result from a person’s deliberate decision to withdraw necessary care. Returning healthy cats to their original location after sterilization and vaccination obviously does not meet the legal requirements for abandonment since their healthy condition suggests that these cats have ample access to resources — and therefore the intention underlying the return of these cats is noble and the foreseeable harm minimal.

Although it’s true that TNR programs are sometimes faced with the unfortunate (and illegal) dumping of cats and kittens at colony feeding sites, there’s simply no evidence to suggest that these cats and kittens would not have been dumped anyway. Moreover, cats abandoned near a managed colony are far more likely to be adopted (multiple studies have found that approximately 30–50 percent or more of TNR cats are adopted into homes6,12,10,9) and/or sterilized and vaccinated, thereby mitigating their potential impact on the overall population of unowned cats (as well any potential impacts on wildlife and the environment). 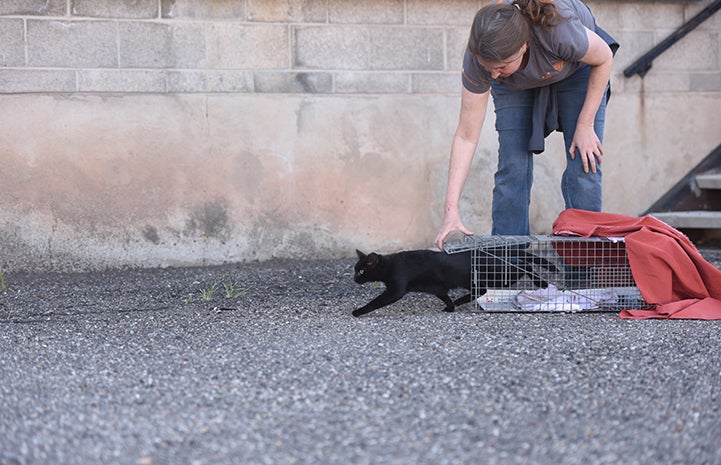 Fiction: Most residents are opposed to TNR for managing the unowned, free-roaming cats in their neighborhood.

Facts: Results of a 2014 national survey commissioned by Best Friends revealed a 68 percent preference for TNR over impoundment followed by lethal injection of unadoptable cats (24 percent).18 That’s nearly three-to-one in favor of TNR. More recently, a 2017 survey (also commissioned by Best Friends) found nearly identical results: 72 percent of respondents supported TNR, compared to just 18 percent favoring impoundment and lethal injection. At a time when Americans are divided about so many policy issues, roughly seven in 10 agree that TNR is the best way to manage community cats.

Results of a 2006 survey commissioned by Alley Cat Allies found that 81 percent of respondents thought “leaving [a] cat where it is outside” was more humane for the cat, compared to the alternative of “having the cat caught and then put down” (14 percent).19 When respondents were asked the same question — but were told to assume the cat would die two years later after being hit by a car — the support for “leaving the cat” remained strong, at 72 percent (with 21 percent preferring to have the cat caught and euthanized). The same questions were asked in two subsequent surveys, the results of which again indicated strong preference (e.g., 73–86 percent of respondents for the first question) for “leaving the cat where it is outside.”20,21 Such attitudes are in line with the results of a 2011 national survey in which just 25 percent of respondents agreed that animal shelters “should be allowed to euthanize animals as a necessary way of controlling the population of animals.”22