You put food on the kitchen counter and turn your back for a few minutes. Moments later, the food has vanished and your dog is standing next to the counter. He looks innocent enough, but he’s licking his lips. Has this scenario happened in your house? If so, it doesn’t take a detective to determine that you have a pooch who’s a counter surfer.

What is counter surfing?

It’s called counter surfing when your dog jumps up onto the kitchen counter and steals food. Smaller, more agile dogs may jump up with all four paws on the counter, while other dogs, those who are tall enough, prop just their front legs on the counter tops to reach any food left out. 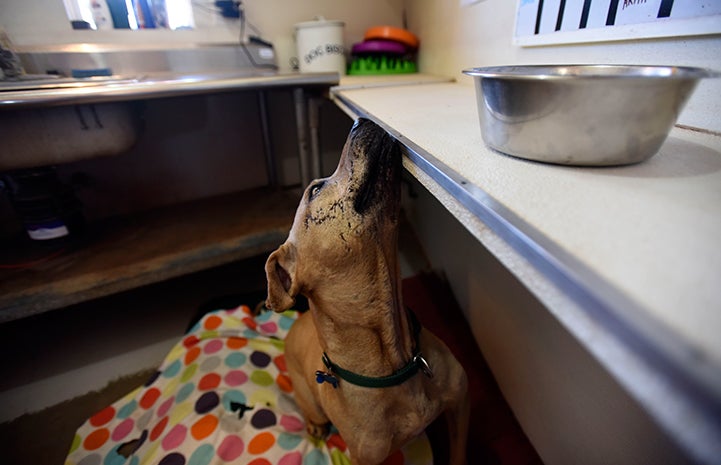 Why does my dog counter surf?

Dogs counter surf because they have learned that kitchen counters are an easy source of yummy snacks. When a dog (or any animal, for that matter) behaves in a certain way and that behavior is rewarded or reinforced, he’s more likely to repeat that behavior in the future. Finding food on the counter when he jumps up is a great reward. Dogs are optimists and opportunists, so even if your dog has only found food on the counter once or twice, he will keep on jumping up to look for it.

How can I prevent my dog from getting on counters and tables?

The simplest solution, of course, is to manage the situation so that your dog doesn’t have access to food on the counters. Here are some tips:

The main objective here is to arrange your environment (the kitchen and counter tops) so that the dog does not have the opportunity for reinforcement (finding food), which makes him more likely to jump up on the counter in the future.

Steps to teach a dog not to get on the counter

To discourage counter surfing, there are a couple behaviors you can teach your dog. “Leave it” is a useful cue for many situations, not the least of which is managing counter surfing. To start training your dog to leave it, go somewhere quiet and less exciting to the dog than the kitchen. Here are the steps to follow:

Make sure the treats with which you are rewarding him are especially tasty, not just plain old kibble. By doing so, you are teaching him that asking him to leave it doesn’t mean he won’t get anything. (On the contrary, he might get something more delicious instead.) When trying to dissuade a counter surfer, you need to help him learn that leaving the human food alone is more rewarding than counter surfing.

“Off” is another useful cue to teach your counter surfer. Here’s how to do it:

Teach your dog the 'off' cue 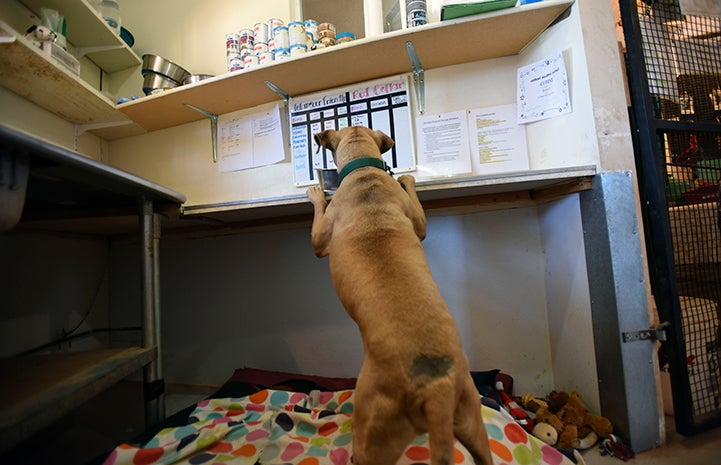 You can also train your dog to go to his bed or special place while you cook or prepare food. This cue is useful when he is hanging out in the kitchen with you and starts getting a little too interested in the food, but your hands are busy so you can’t put him in the crate or relocate him. If you train him to go to his place on cue, he relocates himself. Here are the steps:

Teach your dog to go to his place

Obviously, these strategies only work when you are there to give the cue. When you’re not going to be around, make sure you remove temptation either by blocking off access to the kitchen or by keeping the counters clear of food. Remember, dogs are opportunists, so it’s unfair to expect your dog to ignore that delicious loaf of bread you just baked and left cooling on the counter while you run to the grocery store.

Why is My Cat Not Using The Litter Box? Part 1: Medical Issues