Animal shelters and kennel environments are less than ideal living situations for puppies. Because the puppies are not living with a family or in the comfort of a home, shelters are inherently stressful and generally are not good places for puppy socialization. Most shelter staff are very busy and they often don’t have much time to interact with pets in the shelter.

For those reasons, puppies should spend as little time in shelters as possible. To provide puppies with the best possible care, shelters that do not have an extensive socialization and disease control program should have a network of foster homes or rescue groups to which they can send puppies for care and socialization. If foster homes are not available, then try in any way you can to approximate the experience of a foster home as described below.

A puppy’s primary socialization period, the period of life when it is most important to expose him to people and other dogs, is between three and sixteen weeks. However, when a puppy arrives at a shelter, the staff often don’t know how or if a puppy was socialized to other dogs or people. So, in a shelter or a foster program, intensive efforts at socialization should be extended to 20 weeks. 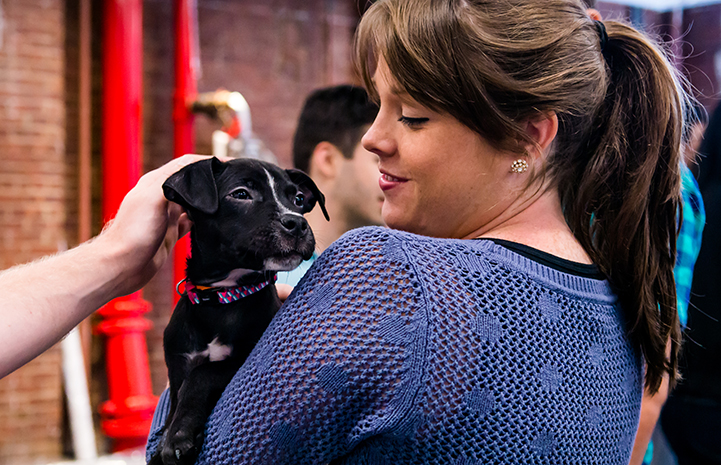 If a puppy is exhibiting behaviors like growling, snapping or biting, there’s a good chance those behaviors can be reversed by implementing a comprehensive positive socialization plan while the puppy is still young. An adult dog who remains fearful due to lack of socialization can be helped through systematic desensitization and counter-conditioning, but the process can be lengthy and could be a lifelong project. That’s why it’s so important to socialize dogs while they are young.

How to socialize a puppy

While socializing a puppy, watch the pup’s body language to determine if he’s feeling safe and happy during these interactions. You’ll want to let the puppy take things at his own speed; don’t force him into situations in which he appears to be uncomfortable. As you introduce the puppy to new experiences, feed him special treats and give lots of praise. Try to avoid exposing the puppy to dogs or humans who might harshly reprimand or significantly frighten him. Discovering new things should be fun for the puppy.

When can puppies be around other dogs?

Beginning at weeks three to seven, puppies learn to feel safe and happy around other dogs. Puppies between three and seven weeks of age must be kept with at least one other puppy and, ideally, with their mother. There are exceptions to this rule, though. For instance, a mother dog who is very aggressive toward humans is likely teaching her pups to behave fearfully toward humans, so she might not be the best role model in this regard. It’s best to find foster parents who can take care of an entire litter, rather than splitting them up. If that’s not possible, sending pups from the same litter to foster homes in groups of two or three is acceptable.

Orphaned puppies should be isolated from all other puppies and adult dogs with compromised immune systems for a 14-day quarantine period, and then put in a group of puppies of similar size, age and vaccination status. During this time, maintain socialization with people as described below. Ideally, orphaned pups should be sent to a foster home that has multiple friendly (and vaccinated) adult dogs so that the puppy can socialize with other dogs.

Once they are seven weeks old and after their second set of parvo/distemper vaccinations, puppies should receive exposure to scrupulously vetted adult dogs and other puppies of the same vaccination status and ideally of similar ages, in puppy groups or classes. Orphaned puppies under 20 weeks of age will benefit significantly from daily playtime with other dogs — preferably puppies of the same age. Adult dogs can also be good playmates, but they must have a consistent history of being patient and gentle with puppies. In all cases, interrupt play if the adult dog appears to be stressed.

How much “street exposure” should you give your foster puppies? Because puppies are vulnerable to certain diseases (such as parvo, distemper and hepatitis), you’ll want to avoid public places like sidewalks and parks frequented by other dogs. It is a good idea, however, to take puppies on car rides and carry them around in public, so they can experience the world while having minimal exposure to pathogens. When the puppies are eight weeks old, new people and other animals who are healthy, vaccinated and friendly can come to your home, and you can work on socializing your puppies to them. Ask all new people to wash their hands before handling puppies under 12 weeks of age.

After you have your veterinarian’s blessing to take the puppies out into the world, you can introduce them to the delights of going for walks in the neighborhood or to the park, and visiting other people’s homes. 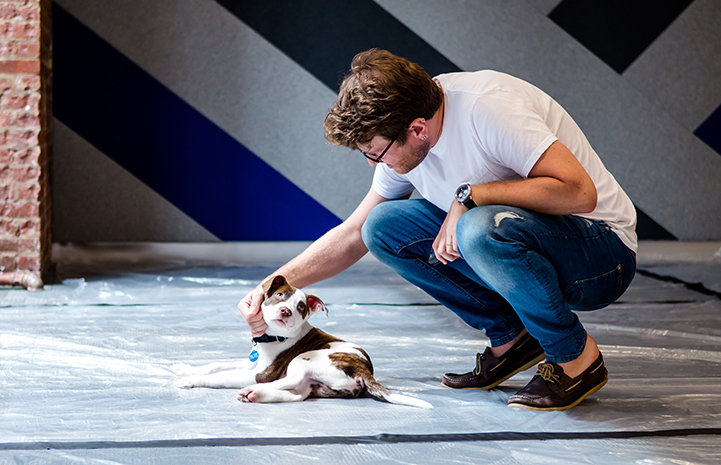 Lots of positive exposure to people is the most important part of puppy socialization. There are several aspects of human exposure that must be provided:

Puppies start learning how to be independent from the other pups in their litter during their socialization period. And puppies should spend as much time as possible (ideally, most of the day) with their foster person. This interaction should include:

Puppies should also receive exposure to lots of different people. They should meet and briefly interact with a minimum of five new people per day.

Puppies bite each other in the course of normal play, and they let each other know — by yelping — when play bites are too hard. This is another reason why it’s important for puppies to experience plenty of play with their litter mates or other puppies. However, when puppies play with humans, they should be discouraged from play biting. When a puppy play bites, say “Ouch!” and get up and walk away. Then encourage play with appropriate toys. 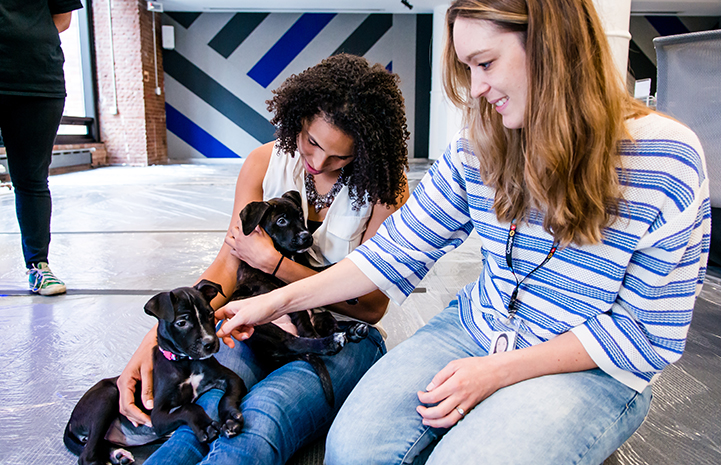 To help prevent your foster puppies from guarding food and other resources from humans, you’ll want to teach them that it’s not necessary to guard these things. To that end, practice each of these exercises several times per day with all puppies:

When puppies are between the ages of three and twenty weeks, they should be exposed to a variety of sounds, scents, surfaces and objects. The idea is to help the puppies become comfortable with typical experiences they will have in their lives as adult dogs. This is another reason that a foster home is preferable to a shelter for most puppies, since shelters don’t allow exposure to normal household stimuli.

Get a dog socialization checklist

To teach them that it is normal and appropriate to be left alone at times, puppies over eight weeks should have some “alone time” every day. Start with a short absence, not a long stretch of time. After giving the puppies enough exercise to tire them out, leave them alone in a puppy-safe enclosure. You can also put the pups in the kitchen with a baby gate preventing access to the rest of the house. Provide toys and “pee pads.” Gradually work up to leaving the puppies alone for longer periods of time.

Note: An excellent resource with comprehensive information on puppy socialization is the book After You Get Your Puppy by Ian Dunbar.