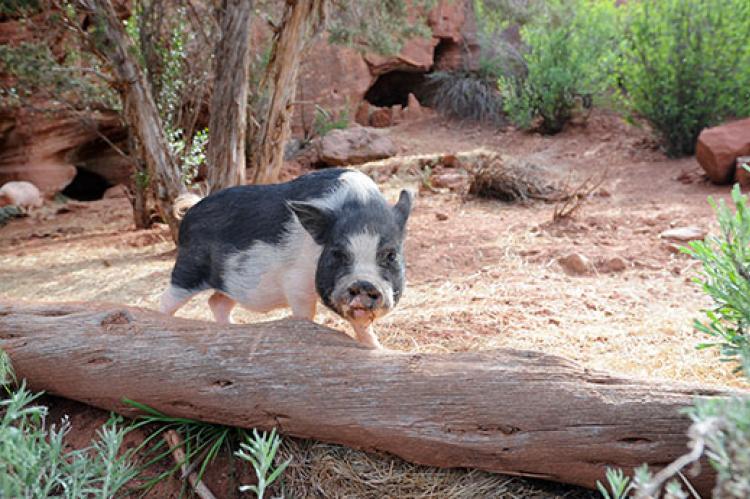 One of the pet trends in recent years is the sale of so-called mini or teacup pigs. (They’re also called micro-mini, Juliana, nano or dandie pigs.) Is it all hype or is there such a thing as a mini pig?

The truth is that very small pigs do exist, but producing a tiny pig comes with negative repercussions for both the pig and the owner, such as a shorter life expectancy and costly medical issues. And sometimes breeders use deceptive tactics to convince buyers that they’re getting a small pig.

One of these tactics is breeding young pigs to one another so when a potential buyer comes to look at the parent pigs, the breeder can say, “Here are the parents; look how small they are. The pig produced from these two will surely be small as well.” The problem is that pigs can breed at four months of age, but they typically reach full height at around three years of age, and can continue to fill out and add weight until they are four or five years old.

Size is one of the primary reasons that pet potbellied pigs are surrendered to rescue groups and shelters. They are relinquished because their unsuspecting owners had no idea their pigs would grow so large. Even if two 75-pound pigs are bred together, there’s no guarantee that the pigs born of those parents will also be only 75 pounds. A pig from that litter could be anywhere from 50 to 150 pounds when full-grown.

Another tactic that some breeders use is sending their piglets out to new piggy parents with a contract stating that the pig should be fed exactly what the breeder recommends — no more, no less. Often, the prescribed amount of food is nowhere near enough to support a growing baby pig. The result is that the pig’s growth can become stunted, which can cause major medical issues.

The lack of food can also cause food-aggressive behaviors. Think about it: If you were hungry all the time, you’d probably get cranky. The same thing can happen with underfed pigs. If they don’t get enough to eat, they can become very food-aggressive: charging the dinner table, biting people’s legs or feet while they’re preparing meals, and even tearing apart cupboards, couches and carpets in search of any tiny morsel of food. It is not uncommon for pet pigs to be surrendered to rescue groups and shelters for this reason.

Inbreeding is another tactic that breeders use in their attempts to create very small pigs. Continually breeding parents to their babies or breeding siblings with one another are unsound breeding practices. It may result in offspring with the desired trait, but they usually also have unintended undesirable traits. Inbreeding can indeed create smaller and smaller pigs, but it can also produce animals with low bone density, reduced immunity, failure to thrive and decreased mental capacity. People who buy these pigs sometimes become overwhelmed by the pigs’ medical issues and, you guessed it, end up relinquishing them to a shelter or rescue group.

At Best Friends, we took in one micro pig who was so delicate that her pink skin bruised at the lightest touch. Another tiny pig who came to the Sanctuary had been on a strict diet of yogurt and oatmeal (per her contract from the breeder). She ended up with intense front leg and shoulder pain, which our vet suspected was caused by a fracture due to low bone density.

Another deception of many breeders is touting their mini pigs as the perfect indoor pet. However, rare is the pet pig who prefers to live inside 100 percent of the time. Potbellied pigs enjoy being part of the family and love to spend some of their time inside the home watching TV, lounging on a soft bed and getting petted. But pigs also need to spend time outdoors with their snouts in the dirt, sniffing, rooting and eating whatever tasty tidbits they find. Pigs in the wild may spend up to 40 percent of their time rooting; if they don’t get to satisfy this natural behavior outside, they will do it inside, at the expense of the family’s furnishings.

A pig named Sullivan was living in a small home and he had no access to the outdoors, causing naughty biting and destructive behaviors. His family surrendered him when they realized that they were not able to provide the proper socialization and stimulation for Sullivan to be a well-behaved pet pig.

For more information about ‘teacup pigs’

Thank you for taking the time to educate yourself about teacup pigs. Here are some links that provide more information:

If you are looking for a porcine friend, please make adoption your only option. There are many reputable sanctuaries across the nation and we are happy to refer you to one located near you. 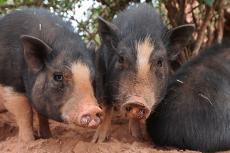 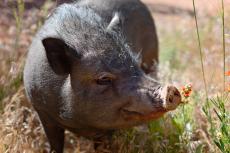 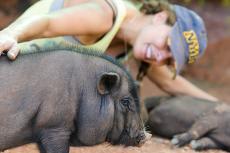 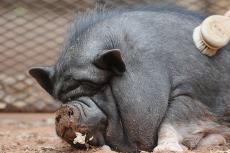 How to Take Care of a Potbellied Pig