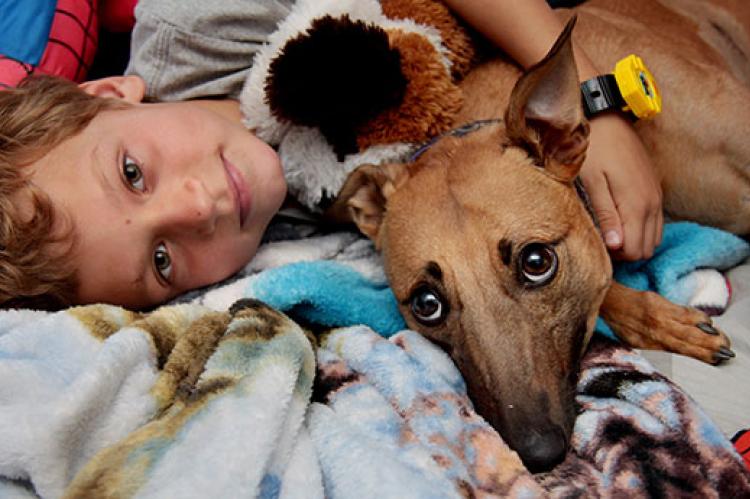 We surround our children with images of animals from the day they are born. We decorate nurseries with stuffed puppies and penguins and hang mobiles with dangling bears and bunnies over cribs. There are animals on the wallpaper; sometimes we even paint animal murals.

And, later on, we want the kids to experience the joys of having a real animal in the house to grow up with. But sometimes it’s not that easy. If you want to bring home a puppy or a kitten to raise alongside the kids, you’re quite likely to find yourself being given the third degree by an adoption counselor at the local shelter. And that can be quite annoying.

Adopting a puppy or kitten

In my opinion, it’s not a good policy to refuse to adopt a puppy or kitten to people simply because they have a small child, but I do think that extra care and supervision are needed in this situation. At Best Friends, we highly encourage anyone with small children to come to the Sanctuary as a family to meet and adopt a puppy or kitten so the right match is made. If we are placing an adult dog or cat with a family that includes small children, we match the family with an animal who is used to being around children.

Households with pets and children

Children do need animals in their lives, and animals can have a magical effect on children. They provide comfort, companionship, life lessons, opportunities to learn how to care for something outside of oneself, and, in many cases, a healing touch. However, bringing an animal into a family should be a privilege and done in a way that is safe for both child and animal. A successful adoption is based on the parents’ careful supervision and commitment to making it work safely for the pet and the child.

As a mother of three children, I waited for my children to be out of the toddler phase before bringing pets into the mix. They were rough enough on me — hair pulling, jumping on me in the bed — and I didn’t want them to do that to a dog or cat.

Other families have made different decisions, and in some cases it has worked out well. A woman named Wendy told me that her oldest daughter was only three years old when Duke came to live with them as an eight-week-old German shepherd puppy. “Lacie would pull on his ears, and she tried to put her hands in his mouth all the time, but he never tried to bite or scratch her,” Wendy told me.

Wendy and her family lucked out with Duke. Shelters and humane societies are full of animals who failed the kid test.

Many years ago, I placed a nine-week-old puppy with a young mother who had a three-year-old son. The son had really impressed me, but two weeks later, the puppy was dead. How could this have happened? The little boy had discovered the joy of throwing things. One day he was throwing his toys down the stairs. His trucks and his teddy bear all landed fine at the bottom, but not the puppy, who broke his neck in the fall.

The distraught mother’s tears and regret were genuine. She agreed that it would be a while before they brought another animal into their home, and then it would be a large adult dog. She was not a bad mother, and this was not a bad child. It was just a bad combination at that age.

A pet and a newborn

In many cases, the animal is already in the home before a child arrives. This also presents some challenges. Many new parents are nervous about how the dog or cat will accept a new baby, and some even give up the pet to avoid problems. But most families want to make it work for both the new baby and the pet.

Shirley prepared her dog, Tommy, for the new baby’s arrival by including him in all the preparations for the nursery. After her new son Milo was born, and before she got back home, she asked Jerry, her husband, to bring home one of the baby’s undershirts for Tommy to sniff in order to prepare him for this new arrival.

“I’m so glad we did that,” she told me. “Tommy has been wonderful with Milo. Of course, we never leave them alone together unsupervised. Tommy’s so big he might do something by accident, and that would be awful.”

A couple with four cats were careful to make the necessary adjustments when they brought their newborn baby home. When Jessica was an infant, they kept the cats out of her sleeping area. They also bought a tent top for the crib as added security so that a cat couldn’t get into the crib to curl up with the baby. There would be plenty of time for that when Jessica got older.

How to introduce a pet to a newborn

Special relationships between children and animals

A recent study reveals that children raised with animals are less likely to develop allergic reactions to animals, so that is an added bonus to having animals already in the house when the kids start arriving.

Animals and children do have a special relationship. They always want to tell you about their best friend, be it a dog, a cat, a guinea pig, or a goldfish. For many children, their pets are like siblings. They are always there, which can make a latchkey kid feel not so alone coming into an empty house after school.

I am a huge fan of children and animals together, but I strongly recommend that parents think it through carefully. The more you understand about what kind of animal is appropriate at each phase of a child’s development, the better the outcome for everyone concerned.

Here’s a rough guide to what’s appropriate at what age:

Birth to six months: A quiet time for the animal/child interaction. No small child should be left unsupervised with an animal.

Six months to a year: Keep pet food and feeding areas away from crawling and toddling children. A child of this age will grab at whatever is in his or her path, so ears and tails are a target, and children have to be carefully supervised around animals to avert any unexpected reactions.

1-3 years: A time of exploration and for putting things in the mouth. A dog or cat who is possessive about his or her toys and food can be potentially dangerous to a child. The child is eye level with a medium to large dog, and dogs can see that as a threat. This age group is especially vulnerable to a biting dog.

4-6 years: By now, a child has mastered quite a lot of language and can understand more about how to interact with another living being, but a firm eye on the situation is still needed.

6-10 years: Your child can now help look after a pet – feeding, cleaning up, walking, and playing with a cat or dog or any other animal in the house.

Teens: At some point in the teen years, your child may develop other priorities in his or her life, such as sports, band, boys, girls, existential philosophy, or shopping. Pet-care chores can suddenly and dramatically go onto the back burner. Parental supervision is a must.

18-20 years: Many kids will be going away to college or joining the military. You need to be ready for the likelihood that taking care of the animals will revert back to the adults or other children in the family.

Adopt a pet from a shelter or rescue