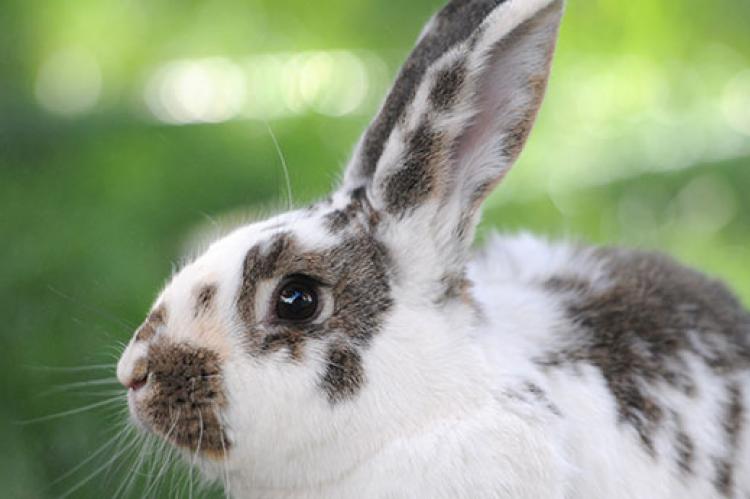 Rabbits have many interesting behaviors and body language quirks. What do different types of bunny behavior, postures and actions mean? Here’s a quick guide to some common bunny behaviors.

Hopping or dancing is a sign of pure joy and happiness. The bunny’s “dancing” can include leaping, doing a binky (jumping straight up and spinning in the air) and racing around.

A bunny ﬂop is very comical and indicates a contented — and tired — bunny.

Rabbits rub their chins (which contain scent glands) on items to get their scent on them. This behavior indicates that the items belong to them and also deﬁnes their territory. The scent is undetectable to humans.

Why do rabbits grunt? If your rabbit grunts, it usually means she is angry – and possibly feels threatened. Sometimes, grunting is followed by a nip or bite. Some rabbits do not like it when you rearrange their cages as you clean; they may grunt, charge or even nip you when you try. They are creatures of habit and once they get things just right, they like them to remain that way.

When a bunny stomps or thumps, this indicates that he or she is frightened, mad, or sensing danger (real or imagined).

Rabbits may softly grind their teeth when they are content (such as when you’re petting them). Loud teeth grinding, however, can indicate that the rabbit is in pain or is ill. Take your bunny to a rabbit veterinarian if you hear loud teeth grinding.

When a bunny circles a person’s feet or legs, this behavior usually indicates sexual or mating behavior (even when your rabbit is neutered). It basically means “I love you.”

How do rabbits play? Well, they like to push or toss objects around. They may also race madly around the house, jump on and off the furniture, and act like children who have had too much sugar. Rabbits love toys and some will play for hours with a favorite toy.

A bunny nip is gentler than a bite. Bunnies will nip to get your attention, or to politely ask you to move out of their way. Rabbits usually do not bite, but if one does, generally it doesn’t mean that he hates you. There are many reasons that might cause a rabbit to bite; for example, he might bite if you grab at him or surprise him. A rabbit may also accidentally bite while tugging at your pant leg. Another reason rabbits bite is that they have poor up-close vision, so they may think that your ﬁnger coming toward them is food — or a predator.

To put a stop to rabbit bites, immediately let out a shrill cry when you are bitten. Rabbits do this when they are hurt. Since they usually do not intend to hurt you, they will be surprised that you have cried out and will usually stop the behavior after a few times.

Why do male and female bunnies spray? They are marking their territory. Un-neutered males will mark female rabbits and their territory by spraying them with urine. Un-spayed females can also indulge in this behavior. It’s another good reason to spay or neuter your rabbits.

Droppings that are not in a pile, but are scattered about, are signs that this territory belongs to the rabbit. This behavior will sometimes occur when a rabbit enters a new environment or if another rabbit is brought into the house. It may be temporary or ongoing. Droppings done in piles indicate that the rabbit needs more litter box training.

This is an indication that your rabbit is hurt or dying. Please seek immediate medical attention.

Even though a rabbit may not be pregnant, an un-spayed female sometimes builds a nest and pulls hair from her chest and stomach to line the nest. She may even stop eating — behavior that usually occurs the day before she gives birth.

Bunnies, like other pets, are occasionally naughty. When that happens, remember that you should never hit a rabbit. It’s cruel and they don’t understand why they are in trouble. They can also become very angry and aggressive if provoked. Instead of punishing bad behavior, it’s usually far more effective to use positive reinforcement to encourage your rabbit to behave in the way you would like. Like many other pets, rabbits can be clicker-trained.

Always be consistent when disciplining rabbits and don’t expect too much from them. Here are two humane things to try if your rabbit is being a bit ornery:

You can help reduce undesirable behavior in your rabbit by spaying or neutering, bunny prooﬁng your house, and providing plenty of toys. 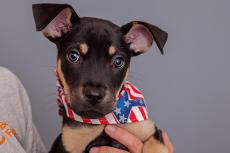 Fireworks and Dogs, Cats and Other Pets 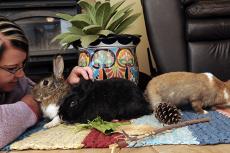