The following are guidelines recommended by Best Friends Animal Society for trapping community cats (free-roaming, stray and feral cats) for the purpose of trap-neuter-vaccinate-return (TNVR). Specific instructions for how to trap feral cats may be slightly different depending on the type of trap that you are using.

Humane traps are widely available from local humane societies, shelters and rescue groups. In addition, these organizations may be able to provide the names and phone numbers of local nonprofit groups that can help you with trapping, as well as the location of low-cost spay/neuter clinics. You can also buy humane traps at some hardware stores and online from websites such as Havahart, Trucatch and Amazon.

If possible, establish a routine and get the cats used to being fed at the same place and time every day. To ensure that the cats will be hungry, don’t feed them the day or night before you are going to trap. Be sure to notify others who feed the cats not to leave food out. Hungry cats will be less apprehensive about entering the trap.

Prepare the area where you will be holding the cats before and after surgery. A garage or other sheltered, temperature-controlled, protected area is best. Lay down newspapers or absorbent material to catch stool, urine and food residue.

Prepare the vehicle you will use to transport them as well. Putting down plastic is a good extra precaution, but you will need to use newspapers or some other absorbent material on top of the plastic. (Urine will roll right off the plastic and that isn’t what you want.)

Plan your day of trapping carefully. Remember that you may have only one chance to successfully trap an animal. If you trap a cat and release him or her, it is unlikely that you will be able to catch that cat again. They learn very quickly! 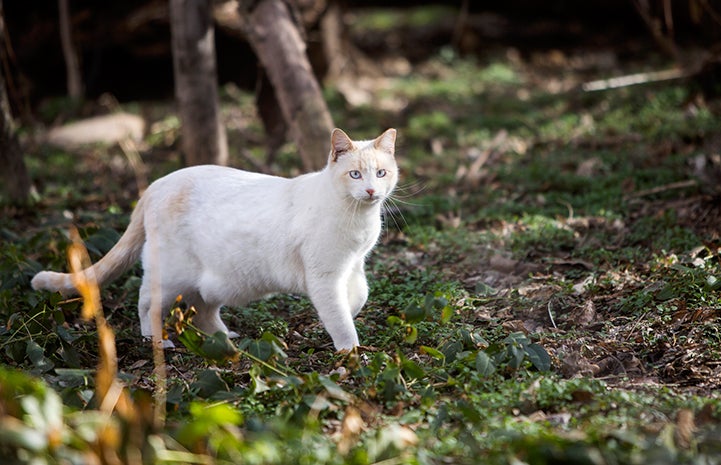 If there are young kittens involved, they will not be weaned from their mother until they are four to six weeks of age, and will not be ready for surgery until they are eight to ten weeks of age. If you are trapping a lactating female, try to locate the kittens and see if they are old enough to be weaned. If you wish to foster, socialize the kittens to people, and find homes for them, they should be taken from the mother at six weeks of age or earlier. If you wait until the kittens are older than six weeks, you will find that the job of socializing them gets harder the older they are. Since kittens are at high risk in most shelters, if you are not able to foster them, we recommend leaving healthy kittens with their mom until they are old enough for TNVR.

Plan to set traps just before or at the cats’ normal feeding time. Dusk is usually the best time to set traps. Don’t trap in the rain or the heat of day without adequate protection for the cats in the traps. Cats are vulnerable in the traps and could get drenched during storms or suffer from heatstroke in the sun.

Place traps in the area where the cats usually feed or have been seen. Cats are much less likely to enter the trap if it wobbles, so make sure you place the trap on a level surface. If you’re trapping in a public area, try to put the traps in spots where they will not be noticed by passersby (who may not understand that you are not trying to harm the cats). Bushes are often places where cats hide and provide good camouflage for the trap.

To bait the trap, spoon a small amount of tuna, mackerel or other smelly treat onto a paper plate. Do not put any food bowls or cans with sharp edges inside the trap. Place the paper plate at the back of the trap, beyond the trip plate. Drizzle some “juice” from the bait along the bottom of the trap to encourage the cat to walk in. If the cat is eating the food without setting off the trip plate or stealing food from the trap, you can place the paper plate on the ground and press the trap down onto the food so that it squishes up through the wire bottom. The idea is to make the food a little hard to get. 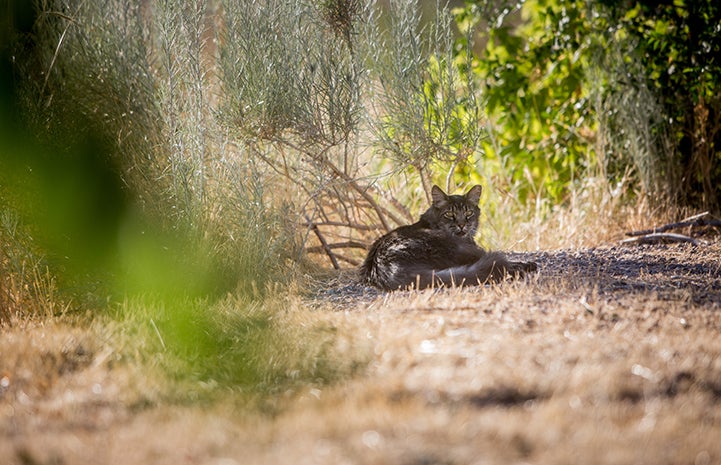 After setting the trap, cover it with a large towel or piece of sheet. Cover the top, sides and back of the trap; fold the material at the front end of the trap to expose the opening. The cover will help to camouflage the trap and serve to calm the cat after he or she is caught.

Waiting nearby for cats to be trapped

Never leave traps unattended in an unprotected area because animals are vulnerable after being trapped. Plus, a passerby may release the cat or steal the trap. Don’t hang around within sight of the cats, though, or you will scare them off. Wait quietly in a place where you can see the traps without disturbing the cats, and be patient. If you’re quite a distance away, you can often hear the traps trip.

As soon as the intended cat is trapped, completely cover the trap and remove the trap from the area immediately. Keeping the cat covered will help him to stay calm. He may thrash some, but resist the urge to release him — and remember that you are doing this for his benefit. You might consider putting another trap in the same spot if it seems to be a popular spot. Be sure to dispose of the food left on the ground when you pick up the trap. You don’t want to litter or give out any freebies to spoil appetites.

When you get the captured cat to a quiet area away from the other traps, lift the cover and check for signs that you have the correct animal and not a pet or a previously neutered community cat (look for an ear-tip). If you note that you have captured a lactating female, check the area for kittens and keep in mind that she must be released as soon as she is awake and alert after surgery so she can care for and nurse her kittens. Cover the trap back up as soon as possible.

If you inadvertently catch a wild animal attracted to the food or a cat you didn’t intend to trap, simply release the animal quietly according to the release procedure below.

After you have finished trapping, you will have to hold the cats overnight in a safe, enclosed location until you can take them to the clinic. Place the cats in the prepared protected area. Keep the cats covered and calm, and don’t feed them. They will remain quiet as long as they are covered. Do not stick your fingers in the traps, try to open the trap, or allow children or pets near the traps. Scared and confined animals may scratch and bite.

Spay and neuter considerations and instructions

Make arrangements in advance with a veterinarian for spaying or neutering and vaccinating the cats. Ask about the possibility of discount rates for community cats, since some vets are willing to offer such reductions as a community service. Tell the vet and staff that they will be dealing with feral cats so they know what to expect. Confirm that dissolvable sutures will be used.

After spay/neuter surgery, if a cat does not seem to be recovering well, consider having him or her re-checked by a vet before releasing the cat. When cats are recovering from anesthesia, they are unable to regulate their body temperature, so keep them in a temperature-controlled area and away from loud noises or other things that might be stressful for them. 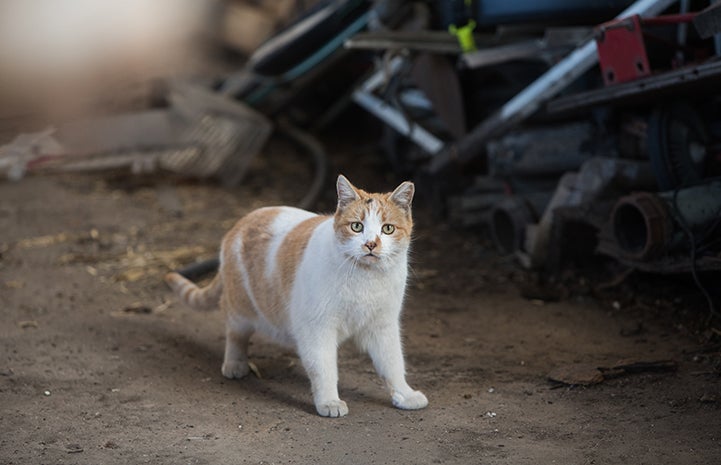 Once the cat is awake, you can use a trap fork to isolate him or her from the door in order to open the door slightly to feed the cat a small amount of canned food. Canned food will provide adequate moisture for the cat so you will not need to supply water (assuming the cat is returned on schedule). In most cases, you will hold the cats overnight after surgery and return them the following morning. However, if you have lactating cats, you may need to return them sooner so they can go back to their kittens. Generally, returning lactating cats a few hours after they are fully awake is allowed, but always confirm with your veterinarian.

There is no need to hold female cats post-surgery longer than male cats. In fact, holding a cat longer can increase the risk of post-surgery complications and infections. Extended holding times beyond the overnight period is usually only needed for cats who had an unforeseen complication during the surgery, who had a harder time recovering from anesthesia or who had an additional issue (e.g., eye removal or leg amputation) requiring extra monitoring.

Return the neutered or spayed cat in the same place that you trapped him or her. Do not relocate the cat; it can be construed as abandonment and the cat may die. It’s common for cats to drive away new cats who appear in their area.

Make sure the spot you pick for release does not encourage the cat to run toward danger (like a busy street) to get away from you. Keep the trap covered until you are ready to release the cat. When you’re ready, simply hold the trap with the door facing away from you, remove the cover, and open the door. The cat will probably bolt immediately out of the trap. If that doesn’t happen, tilt the trap so the back is slightly up and tap on the back of the trap to encourage the cat to leave. Don’t ever put your hand in the trap.

Resume the feeding schedule as usual. You may not see the cat for a couple of days, as he or she may be a little stressed. However, they know where their food source is and will eat when you are not around.

After releasing the cats, hose off the traps and disinfect them with bleach. Never store traps in the “set” (door open) position because animals may wander into the traps (even unbaited ones) and starve to death.