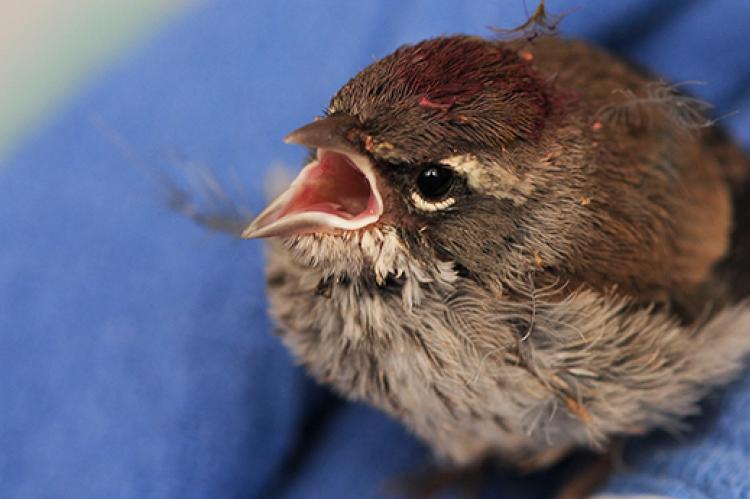 Is the bird an adult, a baby or a fledgling?

If you have found a songbird who appears to be a baby (e.g., seems young and healthy but is not flying), please see “Baby Bird Rescue.” Even if a wild bird you have found appears to be an adult, it’s possible that the bird is in fact a fledgling (a young bird who has only recently acquired his flight feathers). During the spring, summer and early fall months, many young birds just leaving the nest for the first time are found on the ground by people.

Any songbird you find on the ground who is an adult, rather than a fledgling, and who does not immediately fly away from you is in need of help. The bird is either sick or injured and must be taken right away to a licensed wildlife rehabilitator.

Important: For the bird to have the best chance of recovery and release, you must contact a rehabilitator right away and transport the songbird there immediately. Don’t ever try to care for the bird yourself. In most cases, the chances of the bird surviving and being released back to the wild are almost non-existent. Only a licensed wildlife rehabilitator has the special equipment and skills to provide the injured bird with proper care.

If you have determined that an adult bird needs rescuing, follow the instructions below for catching and transporting the bird to a wildlife rehabilitator.

How to catch a hurt bird

There are a great many situations in which you may find an injured bird. Here’s how to catch a bird in different situations:

Trapping a bird in need of help

In some cases, especially with a bird who lives in your yard, you may be able to set out seed on the ground, leading to a pet carrier, and, over a number of days, the bird may go into the carrier, and you may be able to shut the door. However, this method is unsafe for many songbirds because you may trap, and even injure, other birds, and the one who is injured may further injure himself. This method works best with injured pigeons, doves and some other ground feeders.

This information is meant for use only with injured or ill adult songbirds. There is no reason, and it is also illegal, to catch an adult bird who is not injured or ill. It is legal to take a native wild bird directly to a licensed wildlife rehabilitator, but not legal to possess such a bird otherwise.

Once you have the bird in hand, do not let her go; keep a firm (but not tight) hold on the bird. Don’t ever pick up a songbird by a wing, or by both wings, by the head, or by one or both legs — only by the body.

If the bird is bigger than the palm of your hand (a pigeon, for example), hold the bird in one hand, as described above, and put your other hand around the shoulders of both wings of the bird, so that the wings are held folded in their normal, at-rest position against the body of the bird.

Here are some things to be aware of as you handle the bird:

Take the bird inside into a secure room, one where the door can be closed, and where there are no animals or children. It is best if the room has little furniture because if the bird gets away from you, she may slip into a container or behind a piece of furniture, and it may be hard to recover her. A bathroom is often a good room to take the bird into; you can also put a towel under the bathroom door to block off the inch or two of ventilation space.

If the bird seems able to fly, it’s best to cover the windows, until you have the bird inside a box. Otherwise, the bird might get away from you and injure himself by flying into the window.

Cardboard box for an impaired bird

Before you contact a rehabilitator, you’ll need to prepare a box in which to transport the bird. Here are the steps:

Put the cardboard box in an area inside the house where the bird will be away from pets and children, an area that is quiet and in the dark, not air-conditioned and not in the sun. Then leave him alone.

Important: Do not give the bird any food or water unless a rehabilitator specifically instructs you to. It is very easy to drown a bird.

Who to call to help an injured bird

See “Wildlife Rehabilitator: How to Find One” if you don’t know who to contact. Remember to call the rehabilitator before you transport the bird, since you’ll need to find out if the rehabilitator takes songbirds and if he or she has further instructions for you.

How to transport the bird to a wildlife rehabilitator

Your goal is to get the bird to a rehabilitator as soon as possible, ideally within an hour. On the drive, keep the box with the bird in it out of the sun and air-conditioning. If air-conditioning is necessary to maintain a temperature of 85-90 degrees, protect the bird from the breeze. The box needs to be out of any breeze, including a breeze from slightly opened windows. The bird will need quiet, but soothing music at a low volume is fine.

Carry and place the box gently in the car. Young children should not hold or sit next to the box; they are not able to hold the box level and steady enough to avoid re-injuring the bird. If possible, it is better not to bring children with you.

Be prepared to provide some information, such as your name, your address, the time and the exact location where you found the bird, and a description of the incident, if you saw what happened to the bird. If you wish to, ask the rehabilitator if you can call later to find out how the bird is doing.

Once you’ve turned the bird over to the rehabilitator, congratulate yourself on doing the best you could to help an innocent little bird to live and be released back to the wild. 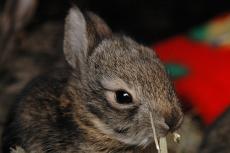 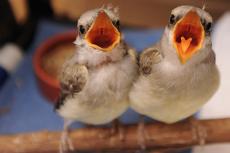