FIV stands for feline immunodeficiency virus. FIV typically causes a weakening of the cat’s immune system. It is the same class of virus as HIV (a lentivirus); however, only cats can get FIV. People and dogs cannot.

How do cats get FIV?

What are the signs of FIV infection?

There are no specific signs of FIV infection. FIV-positive cats have a weaker immune system, so they are more prone to getting infections, such as upper respiratory infections, ringworm and dental disease. Other than that, FIV-positive cats tend to live normal lives and have a normal length of life.

How do I know if my cat has FIV?

There are no obvious signs of FIV, so the only way to know is to do a blood test. The most common screening test is an ELISA test (often called a SNAP test) done by your veterinarian. This test looks for antibodies to FIV. An antibody is a protein made by the cat in response to FIV infection. A cat can test positive as early as two to four weeks after exposure, but in some cases it can take up to eight weeks.

Can FIV be treated?

There are no proven treatments to rid a cat of FIV. Most FIV-positive cats handle the disease well, but it is important to concentrate on treating the secondary illnesses.

What can be done to prevent the spread of FIV?

There is a vaccine for FIV, but Best Friends does not recommend it because the vaccine does not have the best efficacy and, after a cat is vaccinated for FIV, the cat will test positive for the virus. At this point, no test can differentiate whether a cat tests positive for FIV from the vaccine or from having the infection. In some areas, if a cat escapes and is picked up by local animal control and then tested, the cat may be killed because of a positive test.

Can FIV-negative and FIV-positive cats live together?

Yes, as long as the cats get along and do not fight. The risk of an FIV-positive cat spreading the virus to an FIV-negative cat can be minimized by putting both cats in separate rooms until you are confident that they will not fight with each other. Spaying or neutering your pets will also reduce any risk.

Can FIV-positive cats have a good and long life?

Yes, FIV-positive cats can live normal lives, both in quality and duration. They just need to be monitored for infections and dental issues. But if they’re well cared for, they can be healthy, happy, wonderful pets.

FeLV stands for feline leukemia virus. As the name implies, it is a viral infection of cats that affects a cat’s immune system and bone marrow.

How do cats get FeLV?

The virus is typically spread from infected cats to non-infected cats through close personal contact, usually involving saliva. It can be spread by grooming, shared food bowls, bites and other forms of close contact. It can also be transmitted from a mother cat to a kitten in utero and from the milk of an infected cat. Some less common but possible causes of transmission include fleas, blood transfusions or contaminated needles. FeLV is typically not spread through waste.

The virus does not live long outside of a cat host, so spreading FeLV via human clothing and hands is very unlikely. If an FeLV-positive cat is housed in a separate room from an FeLV-negative cat, it is unlikely that transmission will occur. To be on the safe side, food and water bowls should not be shared.

What are the signs of FeLV infection?

There are no specific signs of FeLV infection. In general, cats with FeLV have weaker immune systems, so they are more prone to infections such as upper respiratory infections, dental disease and mycoplasma haemofelis that can cause anemia. Most cats with FeLV live normal lives, but their life span tends to be significantly shorter. Still, adult cats can live many healthy years with the illness. Sadly, kittens contracting the disease often don’t fare as well. Around 80 percent of kittens with FeLV do not live past three years, and most die within a year. The young cats tend to die from feline infectious peritonitis (FIP), lymphoma (a cancer affecting lymphatic tissue), or bone marrow disease. It is less likely for older cats to get a persistent infection, and when they do, they tend to handle the disease better.

How do I know if my cat has FeLV?

The only way to know if your cat is FeLV-positive is to have your veterinarian run an ELISA test. Cats can test positive within a few weeks after exposure, but almost all cats positive for the virus will test positive within 28 days; however, testing positive just means that the virus is circulating in the cat’s blood. It does not mean that the cat will be permanently infected. It is possible for a cat to fight off the infection.

To find out if it is a persistent infection, an IFA test can be sent to a lab. A positive test indicates that the cat is positive for FeLV and always will be. If the test is negative, there is a chance the cat can fight off the infection (although recent research shows that the virus may just be dormant until a physiological stressor allows it to circulate again). If the IFA is negative, both the ELISA and the IFA should be repeated in six weeks. Some cats remain discordant (ELISA positive, but IFA negative) for a very long time due to a localized infection. We don’t recommend that these cats live with FeLV-negative cats, because the virus could be spread. Cats fighting off the virus are less likely to be reinfected, but it is possible.

Can FeLV be treated?

There is no cure for FeLV, so most treatment of FeLV-positive cats involves supportive care. Because FeLV-positive cats have weaker immune systems, they do need to be treated for upper respiratory infections more often than FeLV-negative cats; however, they tend to need dentals at a younger age than other cats.

What can be done to prevent the spread of FeLV?

Since there is no cure, prevention is the best treatment for FeLV. If an FeLV-negative cat is not around a FeLV-positive cat, the FeLV-negative cat will not get the virus. Although it varies depending on where a cat lives, roughly two to eight percent of outdoor cats are FeLV-positive. So, keeping your cats indoors should prevent exposure. Also, all cats coming into the household should be tested before introducing them to your cats.

There is a vaccine for FeLV. If your cat does go outside, or if you bring cats into your house that you cannot test or isolate, your cat should be vaccinated, especially at a young age. The vaccine is not perfect, though. There has been an association of tumors developing at the site of FeLV vaccines. With improvement in vaccines, this is becoming much less common.

A negative cat and positive cat could certainly live in the same house, as long as they do not have contact with each other.

Can FeLV-positive cats have a good life?

Adopt a special-needs pet. The life you’ll save is priceless. 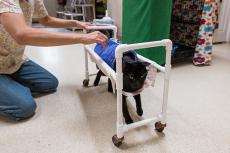 FAQs About Cats in Wheelchairs and Carts 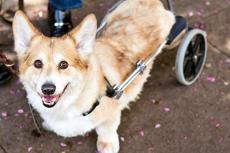 FAQs About Dogs in Wheelchairs and Carts 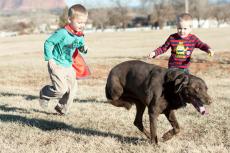 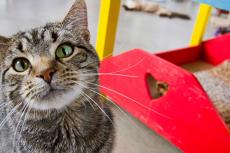 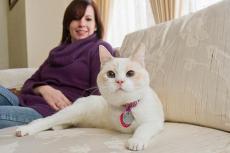