Skip to main content
jenniferh
3
min read
A- A+
Read 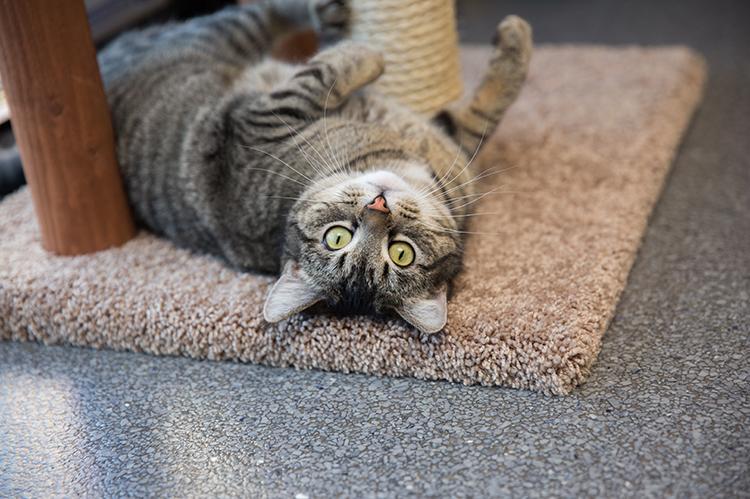 Ask any young child what a cat says and she’ll tell you confidently, “meow.” But is that all that cats say? Meowing is actually just a small part of how cats communicate. Mostly, cats use their bodies to tell us, and each other, how they feel. Everything from their ears, eyes and whiskers to their toes and the tips of their tails give us clues as to what’s going on inside their heads.

A cat who is relaxed will have loose, fluid body movements and his breathing will be slow and steady. He may fold his feet in front of himself, stretch them way out in front, or slouch over the side of a perch. A relaxed cat’s ears and whiskers will be at their neutral positions, or maybe slightly forward. His pupils will be average size (somewhere between wide circles and thin slits), and his eyelids will be soft — perhaps blinking slowly. Those are signs that he feels safe and isn’t concerned about monitoring the environment.

When they’re showing their affection, cats rub themselves on you, often circling, or turning in little figure eights. The cat’s tail will be held high, often with a tiny curve at the very end, showing that she’s happy to see you, or another cat. Head butts and chin rubbing are clear signs that your cat loves you, because cats have scent glands in their faces that allow them to claim friends and objects as their own.

When your cat is spending some time cuddling on your lap, you may notice her kneading (aka “making biscuits”), another sign of enjoyment, because it mimics feeding behavior in nursing kittens. You’ll probably hear your cat purring — a classic sign of contentment.

A cat who’s playing will look a bit different from a cat who is relaxed. That’s because play mimics hunting behaviors, so cats could appear to be aggressive when they’re simply playing. A cat’s pupils may dilate and his eyes may get really wide. His toes will spread apart — to gain traction for sudden movements — and his tail can get twitchy or flick from side to side, which can also be a sign that he’s annoyed or agitated. In the act of play, cats may stalk, chase, pounce, swat, bite, shake, or grab hold and “rabbit kick.”

All of these behaviors are seen in cats who are hunting or defending themselves. The difference between play behaviors and the “real thing” is that play will be quieter, softer and more inefficient. When playing, a cat will put herself into compromising positions (such as rolling on her back), something she would not do in the face of real danger, or if she was hunting actual prey.

A cat who’s mildly stressed, or trying to avoid something unpleasant, may blink rapidly, turn his ears outward or back, and/or turn his head away. His body will be stiff and possibly held low to the ground. He may lean away, or one paw may be raised slightly off the ground. You might notice him yawn, groom, scratch, lick his lips, blink his eyes or drink water excessively.

When maintenance behaviors like grooming are done out of context or to excess during stressful events or circumstances, they’re called displacement behaviors. The cat’s pupils may be dilated, his ears may turn in different directions, and his whiskers may be held further forward than normal. These are all ways to keep tabs on the environment. His tail may be seen twitching or swishing from side to side, or it may be held tightly against his body.

In a cat who’s experiencing an increasing level of fear, anxiety or stress, his ears may be tucked back on his head or held low and rotated to the sides (aka “airplane ears”). His head will fall at or below the level of his shoulders, and his breathing may become very fast. He’ll keep his tail low and may have very squinty or wide, watching eyes with big pupils.

He may hold his legs underneath him in a crouched position or flatten his body to the ground. In extreme cases of fear or aggression, a cat will do the opposite — stretch up onto his toes and arch his back, to make himself appear as large as possible. His hair may stand up on his neck, back or tail.

At high levels of fear and stress, cats will also growl, hiss and spit. If those clear warnings are not heeded, the cat may strike or bite. Needless to say, it’s not wise to push a cat to the point of biting, since their bites can cause deep punctures wounds and often cause infection. In addition, it will be difficult to regain that cat’s trust and repair the fractured relationship. 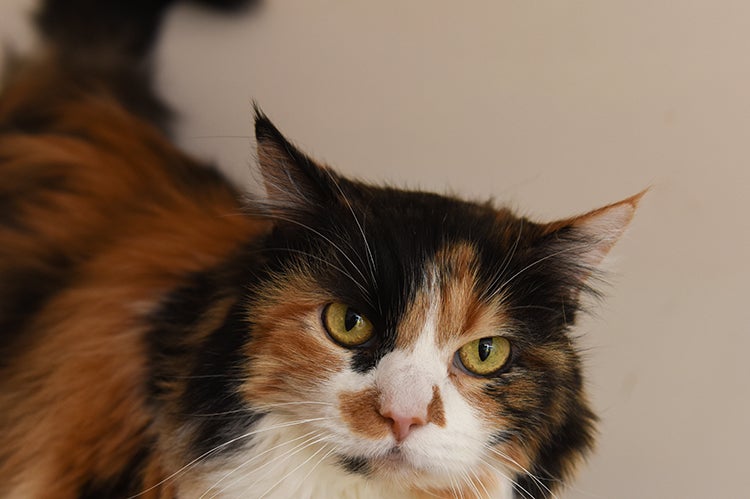 A cat’s body language not only reveals a lot about how the cat feels emotionally, it can reveal if he’s feeling ill. Cats are extremely good at hiding illness, so small body cues can be the first signs of trouble.

A cat who’s feeling sick may hold her head low and squint her eyes or hold them shut. Her ears might sit low or rotated outward, and her whiskers might be pointing downward. She may hold her head, feet and tail very close to her body, so that they’re tucked into a tight ball. Her third eyelids, which are found on the inside corners of the eyes, may be visible because they aren’t being retracted fully. The cat may roll to the side if she feels too weak to prop herself up. You may notice eye or nose discharge, or drooling. If you think that your cat is indicating that she’s ill or in pain, talk to your vet.

To recap: Body language is the primary way that cats communicate. Behavior is always contextual, so pay attention to the cat’s entire body and to what’s going on in the environment. By paying close attention to our cats’ body language, we can do a better job of attending to their needs, and have even stronger, happier relationships with them. 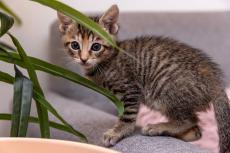 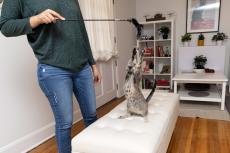 How to Help Your Cat Get Exercise 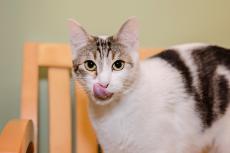 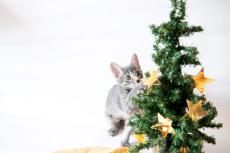 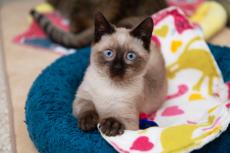 Why Cats Knead (aka Making Biscuits)