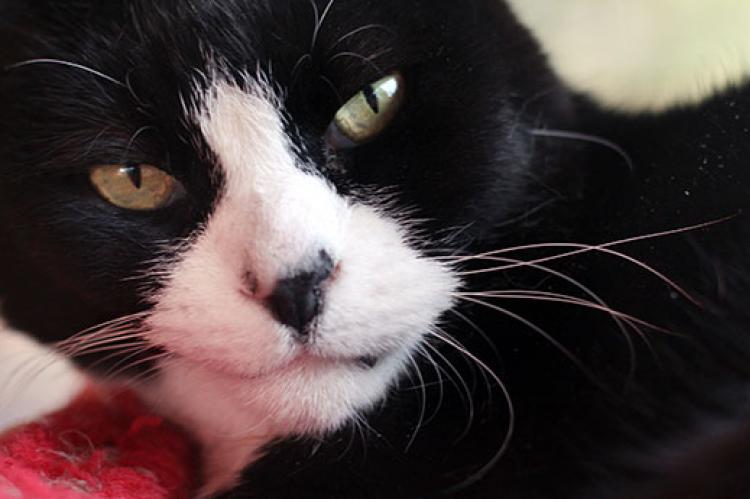 Are you trying to figure out how to handle cat aggression towards other cats? If your cats suddenly start fighting when they previously lived together without altercations, the first step is to take them both to your veterinarian for medical evaluation. Medical problems can cause a cat to be in pain, grouchy or confused, which increases the likelihood for aggressive behavior. If a medical evaluation reveals no abnormalities, the following recommendations may help your cats to resolve their differences. These recommendations will also be helpful for cats who have been introduced to each other recently and are not getting along.

Separating the aggressive cat from the other cat

If one cat keeps attacking a particular cat, the first step is to separate the cats from each other completely — in separate areas of the house. Do not allow them to paw at or smell each other through a door. If they must be in adjoining rooms, place a barrier at the bottom of the door. Ideally, though, you should confine them in separate parts of the house where there is no opportunity for contact. Provide each cat with food, water, a litter box, a comfortable place to sleep, and regular interaction with you (playing and/or petting). It is very important to make certain that you are providing each cat with enough exercise and playful interaction. Oftentimes, fights occur when one cat wants to play and the other cat doesn’t. Providing the playful cat with enough exercise can eliminate the problem.

Recognizing the “triggers” that cause cat fighting

Next, think about the “triggers” that might be causing the fights. For example, your cats may fight when both want attention from you, or they may become territorial and fight over preferred resting places, or they may fight when they see another cat outdoors.

Before you reintroduce the cats (see below), create a plan for how to minimize the triggers that cause fighting. If the cats primarily fight over resources, such as access to food or resting places, provide them with abundant resources. Since a cat will find it much more difficult to guard four food bowls rather than one, aggression is much less likely to occur if you provide more bowls. If the cats attack each other after seeing another animal outdoors, block visual access to the outdoors. Opaque “wallpaper for windows” works well in this situation.

If the cats are fighting over access to and attention from you, you can teach them that this behavior is not rewarding, that it drives away your attention instead. You can do this by paying close attention to the warning signs of anxiety and aggression, which include dilated pupils, growling, a direct stare at the other cat, tense body posture, and a swishing tail. When you see these signs, get up from what you are doing and leave the room. The cats will be left with nothing to fight over.

It is crucial that you leave the room at the first signs of anxiety. If you wait too long, the cats will be so aroused and upset that your presence will no longer be important; they will fight despite the fact that you are no longer in the room. If you are unable to recognize the early signs of an altercation, do not attempt this technique.

Another technique you can use to prevent a fight is to teach the cats to come when called. When you see signs of anxiety, you can call them to you and reward them for their good behavior. Keep a box handy containing special toys or treats that your cats really like. After calling the cats to you, play with them individually or give them each a food reward.

Teaching a cat to come is fairly simple. At every mealtime, when you start going toward the area where the food is located, say “[kitty’s name], come.” Your cat will soon associate mealtime with the word “come.” After one week, start saying “come” at random times during the day. When your cat comes, give her a special treat or play with her with her favorite toy. Practice several times per day. You are teaching your cat that when you give the cue “come,” she is always rewarded. She learns that it is much more worthwhile for her to come to you than to fight with the other cat. Make sure that you always reward her when you call her and she comes to you.

After you have decided what technique to use to prevent aggressive incidents, it is time to reintroduce the cats to each other. Start by allowing the cats some access to each other. Situate each cat on either side of a door adjoining two rooms and let them smell each other through the crack at the bottom of the door.

Next, feed each cat a small bowl of special food (such as canned food or a small amount of tuna) within about five feet of the door. After the cats are eating for a few seconds, open the door between the rooms. If the cats show warning signs of aggression, close the door immediately and remove the food. Wait a while before you try again and when you do, start with the food bowls further away from the door.

The more frequently you are able to do this exercise, the more quickly your cats will progress, but aim for a minimum of twice daily. Over time, move the cats closer to the door, until the cats are able to eat side by side without behaving aggressively. You are teaching them that good things happen in each other’s presence.

After two to three weeks of feeding exercises with no aggression, you can start allowing the cats direct access to each other, with your supervision. Keep each room of the house equipped with special toys and treats. If the cats show warning signs of aggression, distract them, redirect their attention toward you, and take note of when and why the behavior occurred. Remember that mild aggressive displays, such as hissing and then walking away, can be normal when two cats have not seen each other for several weeks. Aggression is a form of communication and is not necessarily bad as long as the cats are simply listening to each other’s communication, and are not fighting with each other.

Cats have glands in their cheeks that produce pheromones, chemical substances that can help to relieve anxiety and that provide information about the cat producing those pheromones. When your cat rubs his or her cheeks against a wall, chair, or your leg, pheromones are left behind. Some cats respond very well to the use of a synthetic pheromone spray or diffuser, products that you can buy in pet supply stores. Because of its calming effect, this product is sometimes effective in helping to reduce aggressive events. (The spray is used in locations where cats rub, like the edge of a couch. The diffuser is plugged into the wall and lasts a month.)

If these techniques do not solve your cats’ problem, please seek the help of your local shelter, a veterinarian, or a behaviorist. Be patient. It takes time for cats to learn how to behave aggressively, so it will also take time to teach them that you do not want them to behave that way. In most cases, providing them with adequate playtime and social interaction and learning how to head off aggressive incidents will resolve the problem.

Read more on how to stop cats from fighting 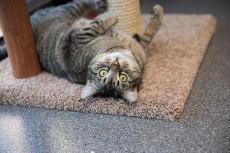 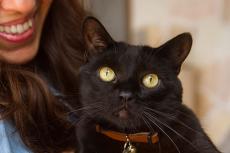 Cat Scared of Noise: How to Help Fearful Cats 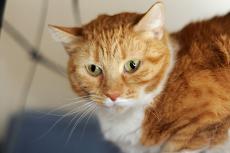 How to Socialize Very Shy or Fearful Cats 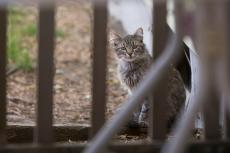 How to Find a Lost Cat 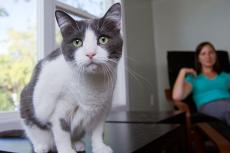 Cat Scared of Strangers: How to Calm Anxious Cats